Drama is everything for these icebergs. Photo credit: Thomas Ronge

Who among our Expedition Antarctica readers likes to have their plans disrupted? I bet most people would rather not have the proverbial wrench thrown at them, but unfortunately disturbance is inevitable. It happens to everyone and in all types of situations despite our best efforts to avoid it. Like most people, I do not like to have my careful planning wrecked by happenstance. But this week, I am taking a different perspective and suggesting that a little disturbance isn’t always a bad thing. 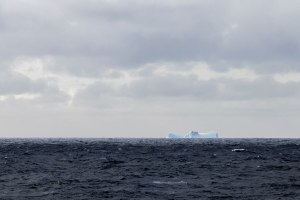 One example of disturbance that Exp. 382 is currently dealing is icebergs. This should not be totally surprising considering that we have ventured into Iceberg Alley. The problem is that the JR is not ice strengthened and therefore doesn’t have the added steel reinforcements required for polar vessels. Rather than risk a potentially danger situation of, um, titanic, proportions, the JR steers clear of icebergs. We do with this using radar and with the help of our ice observer, Diego Mello. Diego is the captain of the R/V Siquliak up in Alaska, so he has plenty of experience with ice. When Diego and our captain, Terry Skinner, say a berg is too close, all drilling operations cease: coring stops, the drill comes up, and the JR moves to a safer location. As you can imagine, this situation is not ideal for the science party. We have a limited amount of ship time, so the time lost waiting for icebergs to move away is time lost collecting cores. Still, it’s a special opportunity to see an iceberg up close. A couple nights ago, the night shift was treated to a close encounter. We trooped outside, tracking the ship’s light, and there it was: ~70 meters of visible ice above the surface and several hundred meters of invisible ice below! The very next day, the icebergs got even closer, with growlers (bergy bits ~5 m long that sound like they’re growling as they float in the water) passing within tens of meters of the ship. Despite the disruption to our operations, I think everyone watching the icebergs is glad to have witnessed one of Antarctica’s most famous sights.

Another disturbance that the science party has had to deal with is coring disturbance, which happens when the coring process disturbs the original depositional structure within the core. This can include flow-in, which occurs when water flows in with the sediment and mixes it up. Disturbance can also occur when something (e.g., a hard piece of sediment or a piece of core liner) gets trapped in the core liner with the sediment and acts like a blade in a blender. We have seen core disturbance in one form or another since drilling began, but a couple of days ago the cores really decided to show off.

Being a diatom ooze is simply not enough for this core section.

The greenish grey oozes and muds took on a marbled look, swirling and flowing to reflect the disturbances that shaped them*. Because these sections are useless for putting stratigraphic changes into context, our stratigraphic correlation team will direct us to an equivalent depth in the next hole to try to recapture these particular sections in their undisturbed form.

I don’t think constant disruptions are a good thing, nor would I want to work around huge roadblocks in my everyday life. But since even the best-laid plans often go awry, especially on Antarctic expeditions, I figure we might as well sit back and enjoy a little disturbance.

*When this entry was first written, the cores in the above pictures were labeled “disturbed” by the Sedimentology team. Stratigraphic analyses in Hole B showed that the sediment had the same structure at an equivalent depth. The stratigraphic correlators and the sedimentologists therefore changed their interpretation to say that the sediment exhibited slumping, and that disturbance had not occurred. Just another example of why multiple holes are drilled at a single site!